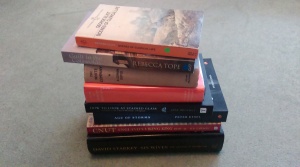 Tsundoku is the Japanese word for books you’ve bought but have not yet read. How brilliant to have such a word – why isn’t there an English one, we must have been piling them up just as much over here for just as long! Here’s some of my own tsundoku. Some was bought on impulse in a bookshop, some ordered after careful thought, some bought at a church fair because I was a friend of the person manning the bookstall and felt I had to buy something.

Authors, how do you feel about your work being tsundoku? Is it enough that your book caught a purchaser’s eye so much that he or she bought it? Or that you’ve had the royalty on that sale? Or are you somewhat put out that you’re still in the To Be Read One Day list?

If the latter, my apologies to the authors in my photo. I suspect that Robert Browning, George Eliot and Arthur Conan Doyle wouldn’t have minded that much.