An ingenious way of combining short stories together to make a novel: I’ve much enjoyed The President’s Hat, by Antoine Laurain (first published in France in 2012, and in translation in England in 2013). 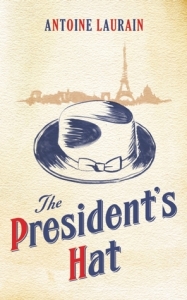 The book tells the stories of the various unrelated people who one way or another come into possession of a hat: in each case, after they do their lives change. Spoiler alert: what follows does reveal some of the action.

Disgruntled accountant Daniel Mercier is treating himself to a seafood platter in a crowded Paris brasserie, when he is asked whether he would mind three newcomers taking the spare places at his table. He agrees and then, to his amazement, President François Mitterand (no less) and two companions sit down, eat and talk amongst themselves. Daniel subsequently finds that whenever he eats an oyster he hears the words “As I was saying to Helmut Kohl last week …” When they leave, Daniel finds that the President has left his hat behind. He takes it. His life changes for the better.

Short story writer (hurrah!) Fanny Marquant is the next owner, after Daniel accidentally leaves the hat on a train. A problem in her love life is resolved, and she is inspired to write a prizewinning story (hurrah again!).

Perfumier Pierre Aslan [sic] is the next wearer of the hat. This brings us extraordinary descriptions of scents of all descriptions, and of the perfume-making process. How the hat affects Pierre, or how it itself gives rise to a new scent, I’ll leave you to find out.

Upper-class Bernard Lavallière is next, and here we move between his conservative, rich milieu and Paris’s trendier, lefty artistic community. In the course of his story we attend a ghastly dinner party in the first world and an equally awful reception in the second.

The stories are sewn together by Daniel Mercier’s efforts to locate and retrieve the hat. And just when we think it’s all over, we get a bizarre twist in the epilogue.

I found this book great fun. And very French: I can’t recall any novel in English revelling to anything like this extent, over and again, in the sheer pleasure of eating good food. And the settings and the sense of Parisian life seem so true.

The translator is named just as ‘Gallic Books’. Well, my congratulations to the she, he or they whose identity/ies lie behind that. And my thanks to my sister who gave me this book as she liked it a lot and thought I would too.

So if you have some short stories that might add up to a novel, see whether you can come up with an ingenious linking-up idea like this.