This week I heard the author Simon Mawer speak about writing: specifically about his novel Prague Spring, but also his other Czech-based books The Glass Room and Mendel’s Dwarf. Prague Spring is set against the events in Czechoslovakia in the fateful summer of 1968, leading to the invasion by the armies of the Warsaw Pact.

Four things of writerly interest in my mind from that talk:

He was asked what effect having The Glass Room shortlisted for the Man Booker Prize 2009 had for his career. It benefited hugely, he said, sales went right up, though not as much as if he’d won! He was easy about not actually winning that year, he assured us, though he was just a bit galled when Hilary won it again two years later … 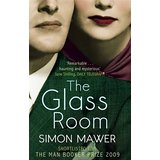 One good thing about being a novelist, he told us, is that you can reinvent your own life. The example he gave was how in the summer of 1968 he had hitchhiked around Europe with a male friend. When in Bavaria they had discussed whether to cross into Czechoslovakia, then enjoying the best days of the Prague Spring, but had decided to go to Greece instead: a decision he had ever since regretted. In Prague Spring two of his main characters set out from England to hitchhike across Europe – a male student (as he had been) James, but this time with an attractive female companion, Ellie; and this time events lead them to cross the Iron Curtain (and thus into the story) rather than go to the Italian sun as planned.

He used more of his own direct experience in James and Ellie’s story. When he and his friend had been hitching they were given a lift by a German lady harpsichordist who interrogated him where he was studying, and when he gave the name of his Oxford college she asked if he knew a particular law professor there, whose friend she was. In Prague Spring he retells this story, with James and Ellie meeting a lady cellist who, likewise, is a friend of a don at his Oxford college.

Perhaps less commonly for novelists, Simon Mawer has a scientific background: his degree was in zoology and for many years he worked as a biology teacher. This shows in a remarkable simile in one of the extracts he read to us on Tuesday: a Russian tank lost in the streets of Prague is likened first to a Martian in HG Wells’ The War of the Worlds but then, more uniquely, to a reptile or arthropod, the muzzle of its gun being a proboscis, which “shifts back and forth, as though sniffing the air, perhaps even trying to work out where the humans have gone.” Not an image that would have occurred to those of us with English literature or history backgrounds, perhaps.

In thrillers, he reminded us (and in whodunits, come to think of it), everything that happens must be related to the plot. But life, of course, isn’t like that. Lots of things happen that don’t link up with anything else. But in a novel you can explore these, and tell them for their own sake. One bizarre episode that features in Prague Spring but is not essential to the plot is the appearance of the Moody Blues. They actually were in Prague at this time, and the day before the Russian invasion they were filmed performing on the city’s famous Charles Bridge. Their appearance in the novel adds colour and interest and tells a true story, and you’re glad it’s there, but in a thriller you’d be wondering what its significance was.

(You can see this surreal performance on YouTube – go to https://www.youtube.com/watch?v=w4_xCA4IO7U , to see these Brummies miming Nights in White Satin to adoring fans on an otherwise empty Charles Bridge for a Franco-Belgian TV programme. It’s strange to think that 24 hours later that area was busy with invading soldiers.)

Truth Is Stranger Than Fiction Dept: In his interview Simon Mawer asked us to reflect on the fact that once the invasion happened, the British Embassy somehow arranged for the Moody Blues to be flown out of the country, apparently in an RAF transport plane. How was it, he asked, that in all the chaos and busyness of those events, someone managed to persuade the new Warsaw Pact controllers of the country to allow an RAF plane into Czechoslovak air space to evacuate a group of British pop singers? Would you dare put such an unlikely happening in a novel?

The interview was organised by the Czech Centre at the Czech Embassy in London. Simon was interviewed by Prague-based journalist David Vaughan, followed by a lively Q&A session with the audience.  Thanks, Czech Centre!