Ninevoices have warned in the past of the dangers of being in Oxford if you’re a fictional character, and we’ve also extolled the works of other writers’ groups. The two come together in The Bodleian Murders and other Oxford stories, produced by the OxPens group in 2016. 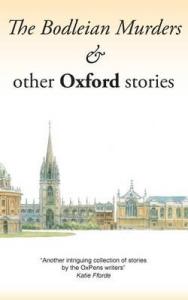 This is the third of five collections of short stories OxPens have produced. It was a gift from my daughter and I’ve much enjoyed its variety. Some of the stories are University-based – such as of course the title story – but others are set elsewhere in the city or in the Oxfordshire countryside. Rural Bliss (set in a village near Chipping Norton) is a warning to husbands of the risks of not taking seriously enough your wife’s delight in rearing sheep. Oggi (set largely near Henley-on-Thames) is about bodgers, craftsmen who make chairs to order from wood they have, er, liberated from woods nearby.

History is well served. Burning Words takes us back to 1555, when the mere ownership of a book inscribed by a burned heretic could bring great danger. In The Stunner from Holywell we see the creation in 1857 of a beautiful painting by Rossetti and what happens to it a century later.  Colin Dexter appears in Just Keep Going, with encouraging word for uncertain writers.

A Visit from Social Services describes just that, and shows us the perils social workers face making house calls on the elderly. In Time for the Wake mysteriously links Oxford with a funeral in Nigeria. The Festival of International Art and Scholarly Culture, Oxford farcically takes us back to the excitement of Olympic year in 2012, when the local Arts Committee decide to join in the festivities in ways that may mean that the dreaming spires won’t get back to sleep for a long, long time. The death count in The Bodleian Murders rivals that in an episode in Midsomer Murders, and that in only ten pages. 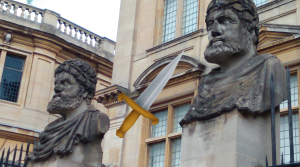 There are 15 stories in all. Lack of mention of the other 6 here shouldn’t be taken as any form of criticism at all! Thanks, OxPens. (http://www.oxpens.co.uk/)

Other writers’ groups that have featured on this site: