A challenging reading list. It’s aimed at school students, but would do us all good if it widened our reading horizons. I found it attached to a tweet from King’s School in Worcester (@KSWLibrary), setting out what pupils (and staff!) are to read by February 2017 if they are to win a gold, silver or bronze award (if they want to podium, in fact). The tweet is dated 22 July if you want to hunt it down. The initiative is part of the BBC Year of Reading.

To win an award you should read:

I wonder if you’re allowed to double up. For example, I’ve just read David Lodge’s comic novel The British Museum is Falling Down. Would that allow me to tick off both A Midlands Author and A Friend’s Recommendation (if my sister is allowed to be a friend)? Before that I’d read Rambling On by Bohumil Hrabal (see https://ninevoices.wordpress.com/2016/08/05/rambling-on/) which would let me tick the Translated box and also the Set in a Foreign Country box.   I imagine that, if we’re honest, many of us have Literary Classics in our Books I’ve Been Meaning to Read category. So, if I do get round to Daniel Deronda or Silas Marner, I could tick two more boxes. No, three, because they were Published Before I Was Born.

This is getting too complicated. And I suspect the judges at the school would frown on all this sleight of hand. So it’s back to Death on the Cherwell.

Well done the school (and the BBC) – let’s hope it works.

What are your Meaning to Read books?

Our creative writing tutor impressed on us the need for short stories to be taut, carefully structured affairs. All repetition was to be cut out, they should start right in the middle of the action, there was to be no unnecessary detail, we should set the scene by showing rather than telling wherever possible. Now I expect short stories to be around 2000 words long, quick and to the point, unrepetitive, with only key details, and a clever twist at the end, and I try to write them like that myself.

So I was wholly unprepared for the book of 19 short stories I’ve just read by Bohumil Hrabal (translated from the Czech).   I’d not read any Hrabal before. The title should have given me a clue: Rambling on: An Apprentice’s Guide to the Gift of the Gab. Sometimes little happens, the narrators ramble, on and on, in sentences that often go on for pages, with multiple bizarre images and adjectives tumbling over each other. They add up to a glorious depiction of life in the 1970s in the village of Kersko, in a forest in what is now the Czech Republic. Basically they often seem to be about men going to the pub! An array of eccentrics are lovingly described, along with country rituals such as those surrounding the killing of a pig. 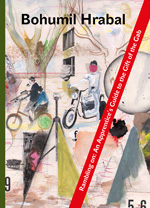 Hrabal wrote these stories around 1975 but they weren’t published in that form until after 1989, because some of the stories were suppressed or altered on the instructions of the Communist censors. Why they found some of these tales offensive is often hard to understand today: the portrait of a policeman might be off limits (he is inordinately proud of his medals, and so punctilious in his job that he loiters off-duty in the woods at night to nab drivers leaving the pub, including his own son), but why forbid a story of a man’s pursuit by bike of a woman who is very much taken with his coiffure, which he has carefully nurtured to resemble that of a famous Slovak footballer of the day?

We read of a hoarder of useless ‘bargains’, who gets the narrator’s help in cutting up a sheep. Another story is a hymn to the beauty of apple blossom, and a surreal account of a farmer’s unsuccessful attempts to stop his ram impregnating his ewes. A third tells of a grossly fat man who lies down to weed his garden and who talks endlessly about ‘fining’ (or ageing) salami, but he is so greedy that he always eats the salami before it has hung for the requisite time. A fourth is about a self-appointed expert and organiser who appears at every village festivity and he insists on helping villagers in whatever they do but, unfortunately, his advice is usually wrong.

My favourite is a wonderful story of a feast shared by rival hunting clubs. They have quarrelled over who should have a celebratory feast, to eat a boar that fled from the territory of one group to be shot on the other’s (in a school, in front of the children), and so have a joint banquet. The details of the chase and of the feast are gleefully related, along with arguments over the menu and practical jokes played during the meal, which at one time has a dangerous stand-off with both sides pointing guns at each other.

The last two stories become increasingly surreal, stream of consciousness monologues in which I admired the vividness of the writing even though I didn’t know what was going on …

My translation was published in 2014, by Charles University in Prague. It has several colour illustrations by Jiři Grus. There is an Afterword by the editor, Václav Kadlec, which gives helpful background. There’s also a Translator’s Note by David Short, formerly of the School for Slavonic & East European Studies, in which he speaks of the peculiar difficulties that abound in translating the rambling style of these stories, and how he set about overcoming them. Successfully, in my book!