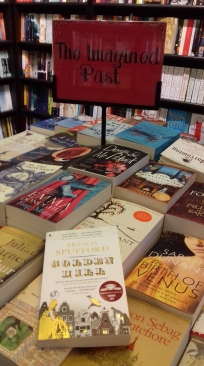 On one of my frequent trawls through the treasures in our local Waterstones I noticed that the wonderful Golden Hill by Francis Spufford is out in paperback. For anyone who enjoys a classy historical novel, this would make a perfect Christmas gift.

Having loved the book in hardback, and enthused about it on this site when it first came out, I thought I’d reproduce those earlier thoughts here. Since that time I’ve re-read Golden Hill several times, seeking pointers on how to write a top-flight historical novel. Francis Spufford makes it look easy, but sadly that isn’t so…

With apologies for repeating myself, here, again, are my thoughts on this outstanding book. I’m still waiting for him to write a sequel, or Hollywood to come up with the film. It’s a cracking tale.

An impatient, personable young man from London has himself rowed from the brig Henrietta to the New York shore of 1746, carrying a bill of exchange in his pocket. It’s for the vast amount of one thousand pounds – and must be honoured within sixty days by trader Master Lovell, who owes this sum to the London company who issued the bill.

Deeply suspicious of this ‘strip of a boy who comes demanding payment of an awk’ard-sized fortune, on no surety‘ – and with London a six-week sail across the ocean, meaning a fraud couldn’t be uncovered before the money falls due – Lovell and his fellow merchants have a decision to take which could ruin them. Is the mysterious Richard Smith genuine? A bold-faced crook? Up to devious political mischief? Or attempting something much darker?

For everyone agrees he’s up to something. He openly admits to it. Yet despite hints and red herrings, nothing will get the truth out of him – not offers of violence, rooftop chases, a duel, a branding, nor the threat of the hangman’s noose. Smith keeps his surprising secret to the final page.

Francis Spufford’s novel is a fine plum pudding of a book, rich with spice and full of silver-sixpence-like surprises. I gobbled it up, swallowing (along with envy of an author who can create such a clever game of pass-the-parcel) layer-upon-layer of story from which the reader must tease out clues to the secret at its core.

The language is gloriously dense in places. But if it is occasionally purple, it’s the colour of a Georgian brocade waistcoat, the texture of the cloth opulent under one’s exploring fingers, yet not necessarily giving helpful information about the wearer’s identity. This is arguably necessary, since modern language would struggle to convey the landscape of a city where church spires look down on a display of trophy human scalps; where the reality of a duel of honour is a blundering struggle through deep snow, with spurting blood and unexpected consequences; where one of the great cities of the world is in the bold process of creating itself.

Then there are Spufford’s wonderful characters: the feline Tabitha, who hates novels yet quotes Shakespeare; the voluptuous Mrs Tomlinson, who makes Smith a saucy but generous offer he cannot, for politeness, refuse; the intriguingly erudite Achilles, ‘a tall African of about Smith’s age, wearing livery, with long limbs and a tight knob of a head like the bole of a dark tree‘ who has a complex and surprising relationship with Septimus Oakeshott, the Governor’s young aide. My heart still breaks over Septimus.

Historical novels don’t have to be bodice-rippers. They can be Wolf Hall. They can be The Miniaturist. They can be Golden Hill. Those of us trying to write about the distant past can only see such mastery, and gnash our teeth with envy.