What would a writer prefer? Great success in his or her lifetime, but then dropping out of sight? Or obscurity while she or he lives, but immortal fame afterwards? Chance would be a fine thing, many of us would answer, and we’d be delighted with ‘Local Writer Writes Interesting Story’ on page 4 of the entertainment section of our local newspaper, but we can always dream …

I muse on this because of the mention of John Creasey in my last post (on very valuable commas). How fame can pass. When I was at school he was one of Britain’s most prolific and successful crime writers, under his own name and his several pseudonyms such as JJ Marric and Antony Morton. He sold over 80 million books. His dates? 1908-1973. 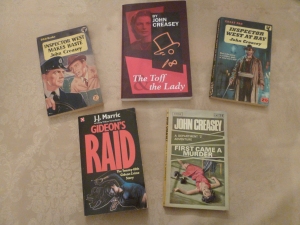 On my shelf I have tales of his heroes Inspector West, Commander Gideon and the Toff. These are pictured. I used to have many more, but when I was a teenager my collection fell victim to a domestic misunderstanding and in my absence was given away for sale at the local village fete. (The Gideon book pictured is actually not one he wrote himself, but was written after his death ‘in his footsteps’ by William Vivian Butler. There’s a better picture of covers of John Creasey’s novels at http://www.johncreasey.co.uk/.)

I loved his work. His name is retained in the John Creasey New Blood Dagger Award, but apart from that he is largely overlooked. Perhaps his books are too rooted in their time: Inspector West and Commander Gideon are incorruptible, and don’t have damaged back stories. It wouldn’t be overly unlikely in his 1950s novels for a criminal to mutter “It’s a fair cop, guv”. Tethered Camel Publishing recently reprinted some of John Creasey’s titles, but if you look on the shelves in Waterstones you won’t find him.

So fame can be fleeting. Maybe, if I were selling 80 million copies, I’d say “Let it fleet.”

What would be your choice? Lifetime success or posthumous fame?