This month marks the publication of The Servant, an historical novel by ninevoices’ own Maggie Richell-Davies. Inspired by the author’s visit to the Foundling Hospital Museum in London and set in the latter half of the 18th century, The Servant tells the story of Hannah, the orphaned daughter of a silk weaver forced into service at the age of 15. At first Hannah is employed in the safe and nurturing home of a widow, Mistress Buttermere. But when circumstances change, she is obliged to move to the sinister Chalke household where, in addition to hard work and cruelty, she encounters mystery, villainy and danger.

The Foundling Hospital’s clients were largely from the servant class, women who had little in the way of education, even less in the way of rights, and were therefore ripe for exploitation, as Hannah’s story in The Servant so vividly illustrates. The author shows with sometimes excruciating period detail the difficult lives of housemaids, cooks, beggars, and fallen women. For example, when desperate circumstances force Hannah to leave the Chalkes, she is led by her friend and co-worker to the only relatively safe lodgings she can afford: ‘We reach a stinking network of courtyards, washing frozen into ragged shapes on sagging ropes, and stop before a derelict house. Wooden planks are nailed over most of the windows… Inside, the stench is like a buffet in the face and I bite the edge of my shawl to stop my stomach heaving… damp mottles the walls as if they have a scabrous disease.’

The novel is beautifully (‘The sky is pewter rubbed with sharp sand.’) and economically written with strong characterizations. Hannah’s first sighting of Mistress Chalke in the opening pages fills us with dread: ‘…the visitor is ramrod straight. Hands twisting like snakes in the lap of her black gown…The eyes…sharp as a skinning knife.’

Despite the peril and powerlessness of her position, Hannah finds reserves of strength and ingenuity to both survive and act to bring about justice. In this she is aided by Peg, as downtrodden a scullery maid as ever there was, and other women who act in defiance of men’s control. My favourite of these is Fat Nellie, a wise and strong-minded woman who minds children in the lodging next to Hannah’s and provides practical assistance without expectation of return. I’d have liked to see more of Nellie, especially at the end of the book.

Unlike most women of her class, Hannah can read and write. Her intellectual curiosity endears her to farmer Thomas, a thoughtful and well-read widower who delivers milk to the Chalke household. It also drives her to discover the nature of the Chalke’s villainy and seek to end it.

All in all this is a satisfying novel rich in historical detail with a sympathetic heroine battling to survive the injustices of the age.

The Servant, which won the Historical Writers’ Association 2020 Unpublished Novel Award, is available via Amazon on Kindle at a very affordable £2.99, and paperback at £7.99. 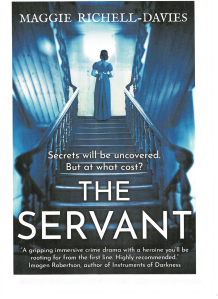 Back in 2015 I visited London’s Foundling Hospital Museum for the first time. It is an emotive place and I couldn’t get the heart-breaking stories it told – about the tokens desperate mothers left in the hope that they might, one day, be able to retrieve their precious child – out of my head. My book, The Servant, is the result.

Founded by Royal Charter in 1739, The London Foundling Hospital came into existence after seventeen years of effort by retired sea captain, William Coram, to make ‘Provision for Foundlings’. His eventual success was due, to a great extent, to his gaining the support of sixteen ladies of high rank, headed by the Duchess of Somerset. Their signatures on The Ladies Petition was presented to George III in 1735.

Initially, it was a short story – The Gingham Square – sent off to a Fish competition which also offered the bonus of a critique of your entry. The story itself (fortunately, as it turned out) failed to be placed, but the feedback I received from their editor was more than positive. It suggested that while the scope of what I had written was overwhelming for the short story form, it had the potential for something larger: a book.

Reader, I set my shoulder to the wheel.

Producing The Servant been a tortuous process which would have been impossible without the support of the outstanding input of other members of ninevoices. Extracts were read out loud at our WIP meetings, red pencils were flourished over purple prose, tactful hints made about pruning my obsessive use of research material, with even the odd encouraging cartoon added in the margin.

Finally, last September, I learned from the invaluable pages of Writing Magazine that the Historical Writers Association, in partnership with Sharpe Books, were promoting a competition to find an unpublished historical novel. The prize was £500 and a publishing deal. To my delighted amazement, after the excitement of being shortlisted, I discovered that I had won.

Our followers will know that I have been writing and submitting for years and, despite having a couple of short stories published and some encouraging feedback from agents, rejection was the absolute norm. Until now.

Please let me encourage all you other writers out there to keep going. To keep entering competitions. And to find some like-minded writing friends. Not to mention a few supportive beta-reading dogs to rest an encouraging head on your knee.