Another case of fame in a writer’s lifetime, but absence from the bookshop shelves today, is Erle Stanley Gardner (1889-1970). I loved his books when a schoolboy. I had quite a collection, now shrunk to the three pictured (following the domestic mishap mentioned in my post about John Creasey at https://ninevoices.wordpress.com/2018/02/19/no-longer-on-the-bookshop-shelves/). 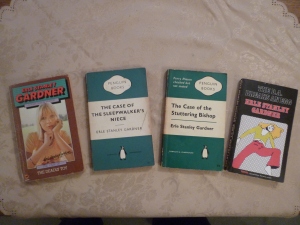 In the 1960s he was in the Guinness Book of Records as the world’s most prolific author, as I recall. Wikipedia lists over 150 of his novels, plus short stories. American editions of his books alone sold 170 million copies, and he was America’s best-selling novelist for a chunk of the 20th century. He wrote by dictating, and sometimes had more than one book on the go at a time. Given the successful and repeated formulas of his books this might have caused confusion, but if it did I never noticed. According to his obituary in the New York Times he liked being called “the fiction factory” and even “the Henry Ford of detective novelists.” (https://en.wikipedia.org/wiki/Erle_Stanley_Gardner_bibliography)

I can’t find him in first-run bookshops now – though I can still come across Perry Mason films late at night in the upper reaches of my cable channels.

The ever-present characters: Perry Mason, the intrepid and skilful defence lawyer, who always unmasks the real villain in a courtroom climax, to the relief of his unjustly accused client; Della Street, his loyal and efficient secretary; Paul Drake, the private detective who has an apparently inexhaustible number of employees able to drop everything to help Perry, with hardly ever a mention of a bill being presented; and Hamilton Burger, the hapless District Attorney who loses to Perry Mason almost every time. I came to feel sorry for Hamilton Burger. My own image of Perry Mason wasn’t the Raymond Burr of the TV series: my Mason was more, er, youthful, and slimmer. However, I read now that Raymond Burr actually auditioned for the part of Hamilton Burger, but when ESG saw him he said he was just how he imagined Mason.

ESG wrote other characters as well as Perry Mason, including his ‘DA’ series, possibly as a change from the victorious defender Mason, or to show that he could sympathise with the prosecution too?

And we all love a courtroom drama, don’t we?

ESG never claimed to be a great literary novelist. But he brought pleasure to millions. Thanks, Erle.