If you’re a writer, budding or established, do you spend enough time doing nothing, do you take time to stop and stare? Do you ever just sit or lie there, and look at the view? 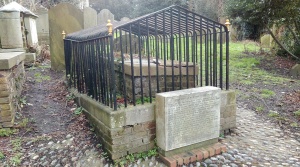 No less a giant than Byron did just that. On this tomb in the churchyard of St Mary’s church in Harrow-on-the-Hill. It was presumably in better repair then, and without the railings subsequently put on because of the very fame he had brought it. Its occupant was “John Peachey Esq, of the island of St Christopher’s”, who has thus gained prolonged and unintended fame because of his grave’s location and the identity of its famous lounger.

According to a picture in the guide to the church, Byron lay on it propped up on his elbows. This looks uncomfortable, but it seems he lay there for hours, looking at the view, for when addressing the elm that was then above the grave he wrote,

“Thou drooping Elm! Beneath whose boughs I lay,
And frequent mused the twilight hours away …”

A plaque at the spot says, “In school he was known for his witty epigrams and satires, but it was here, surrounded by reminders of mortality, that he invoked a more melancholy and reflective muse.”

He was a pupil at Harrow School at the time (from 1801 to 1805), so either he just played hooky when he should have been inside doing his homework, or noble scholars like him didn’t have homework to bother with. The plaque says that he came here “to escape the restraints of school life”. The guide to the church does say that “he was rather an erratic student” at Harrow, and that he “was a ringleader in a lot to blow up George Butler who the boys did not want as Head Master”, so perhaps the teachers were quite happy to let him lie for hours in the churchyard …

His poem “Lines Written Beneath An Elm In The Churchyard Of Harrow” can be found at http://www.famouspoetsandpoems.com/poets/lord_byron%20/poems/5989. The first verse is reproduced on the stone at the front of the tomb, put there in 1905 by the son of one of his school friends.

The elm he addressed went long ago but here are its successors.

In 1822 Byron was planning where to bury his 5-year-old daughter Allegra, and he wrote:

“There is a spot in [St Mary’s] churchyard, near the footpath, on the brow of the hill looking towards Windsor, and a tomb under a large tree (bearing the name of Peachie, or Peachey), where I used to sit for hours and hours when a boy. This was my favourite spot …” He wanted Allegra to be buried in the church, with a stone memorial bearing his own composition, but his reputation was so bad that the Rector and churchwardens refused his request and buried her in an unmarked grave. Today there’s a memorial to her near the south porch. (An account of this little girl’s sad life can be found at https://darkestlondon.com/tag/harrow-on-the-hill/.  Warning: Byron does not come out of this well.)  Here’s the view towards Windsor:

So, o writers ye, you are allowed to take time off just to gaze and muse. You don’t have to always be checking your e-mails or honing your synopsis. But where do you do this? In a churchyard like Byron? In your local park (will there one day be a plaque on a bench saying “This was Lavinia’s favourite spot”?)? On a country ramble?     Do tell …