You may be on holiday, but why not spend an hour or two by the pool with your ipad while sipping some chilled white wine…?

The Willesden Herald is offering a bottle of Champagne, a specially inscribed mug and publication to the winner of their short story competition. Ten winning and shortlisted stories will be published in the paper and, after 150 entries, ‘entry fees less submittable fees’ will go into a prize fund to be shared equally between the top ten authors. Stories, on any theme, can be up to 7,500 words. The entry fee is £5 and full details can be found on the website: www.http://willesdenherald.blogspot.co.uk   Closing date is 31st August.

SaveAsWriters in Canterbury are running a competition to commemorate the 100th anniversary of the Easter Rising.  The closing date is August 3rd.  They are looking for stories of up to 3,000 words on the theme of ‘rebellion’. Entry fee is £4 and prizes are £100, £50 and £25. Details: http://www.saveaswriters.co.uk

The Terence Rattigan Society Award offers a prize of £2,500 plus a guaranteed theatre production to the winner of the best original 75-minute new play, preferably with an interval. Plays should be for no more than six actors (doubling allowed), and must not previously have been performed or have won any other award. The final judges will be writer Julian Fellowes, director Thea Sharrock, drama professor Dan Reballato and actor David Suchet. A runner-up will receive £1,000 plus a public reading of the play. Entry is FREE, and the closing date is August 31st. Check full details: http://www.theterencerattigansociety.co.uk 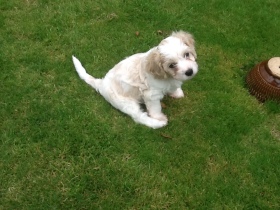 ninevoices get invaluable support and inspiration from all our four-legged associates.

Glamorous, ash-blonde Yuki, and her companion, the one-eyed Lucy;  Flax, whose life’s ambition is to get her chompers on our crisps; pocket-sized Honey, who goes from lap to lap for cuddles like a game of pass-the-parcel;  Alfie, and his nameless tortoise friend who confuses red-painted toenails in sandals with succulent strawberries and tries to snatch a nibble;  and Daisy, who clears off into the shrubbery with a supercilious twitch of her black whiskers when the house fills up with writers.

Now, however, Bamber, who shows off by pirouetting along Val’s picture rail during sessions (oh, yes, he does – there’s photographic evidence), has an utterly adorable new friend: SKIPPER.

Know that Stationery Shop feeling? That all your authorial ambitions will be fulfilled, once you’ve bought lots of that lovely, pristine stuff?

Here it is, summed up in David Lodge’s The British Museum is Falling Down (1965).   Our hero, Adam Appleby, knows he ought to return to the BM’s Reading Room to write his dissertation, but he can’t get down to it.

“In Great Russell Street he lingered outside the windows of bookshops, stationers and small publishers. The stationers particularly fascinated him. He coveted the files, punches, staplers, erasers, coloured inks and gadgets whose functions remained a teasing mystery, thinking that if only he could afford to equip himself with all this apparatus his thesis would write itself: he would be automated.”

The Bridport Novel Competition published their longlist this past weekend – and I wasn’t on it! I must confess to being full of hope, not of winning, but of maybe scraping through as the bottom manuscript in the hopeful pile.

It was not to be. But congratulations to those talented people who succeeded. Their names will doubtless be on everyone’s lips in the next year or two. I don’t begrudge them their current happiness. (Well, not VERY much…)

What I’ve gained from the process is greatly increased productivity. With a deadline in view, I discovered I could (fairly easily) tap out something like fifteen hundred words on a good morning. Keep that up, and my book will be finished by the end of the summer. That’s a result in itself.

I guess you also need an intriguing title. Below are the longlisted novels (the author names haven’t yet been revealed) to whet your appetites:

Lights out at the Electric

How to Save a Brain

I Wanna Be Your Dog

Far Beyond Those Woods

The Commune by the Park

The Letters of Junius

Out of the Forest

If Hamlet was a Girl

“I couldn’t find make-up remover pads.”
Me: “Ok.”
“So I bought Andrex Washlets.”
Lovely, I think, bum wipes for my face. 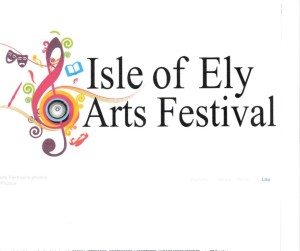 Our very own Val has just learned that she’s won second prize in the Isle of Ely Arts Festival Short Story Competition. The brief was to produce a 500-word unpublished story inspired by Shakespeare.

What tremendous news. Val’s special interest is in writing plays and sketches (we’ve seen them performed, they’re great), but she’s also a knowledgeable fan of Shakespeare and a talented short story writer. Small wonder she did so well.

A hit. A palpable hit!  (With apologies for using a quote from Hamlet, rather than Othello, the play which inspired her entry)

This is usually the place for my personal crash-and-burn stories. I’m actually preparing for an imminent rejection from the Bridport Novel Competition people, since they publish their long list at the weekend.

HOWEVER (by courtesy of the LitRejection twitterfeed – which I hadn’t the expertise to transport into this blog) I give below the text of a rather historic BBC email:

I’m afraid I thought this one as dire as its title.

It’s a kind of ‘Prince of Denmark’ of the hotel world.  A collection of cliches (sic) and stock characters which I can’t see being anything but a disaster. 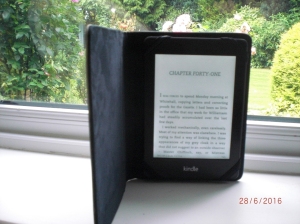 Had an exchange with https://lionaroundwriting.com some weeks ago about how best to edit one’s own work. Sharing with friends, reading out loud and running the draft off in a weird-looking font were the best things we could come up with.

HOWEVER, since then a ninevoices colleague has suggested downloading my manuscript onto my Kindle. Brilliant idea! I now have my work-in-progress manuscript on my Kindle and can not only refer to it on train journeys, but can view it in a totally different perspective. Errors, typos and weak passages suddenly leap out at me. (Too many of them, I fear) It’s a revelation.

All I had to do was save the work as a PDF file, alert Amazon to my ‘writing’ email address, and press a few buttons. Do give it a try.

The above example, I have to admit, is NOT from my own novel. 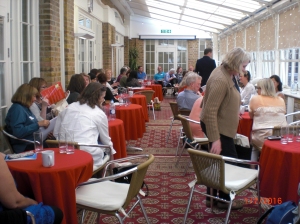 A professional writer is an amateur who didn’t quit.  (Robert Bach)

We can all learn how to do what we do, better – writers included. I spent last Saturday at the Bloomsbury Publishing offices in London’s Bedford Square. Bloomsbury Publishing, in concert with the Writers & Artists’ Yearbook people, offer a range of helpful workshops – How to Write Historical Fiction and Get Published being one of them. Over fifty committed writers split into workshops covering ancient, medieval and modern periods, taken by published authors in each field: Louisa Young (My Dear I Wanted To Tell you), Antony Riches, who writes the Empire series, Wounds of Honour, set in ancient Rome, and S D Sykes (about whom more below).

In the afternoon, there was a keynote talk by Suzanne Dunn (The Sixth Wife and The Lady of Misrule) with a subsequent open discussion with her agent, Antony Topping. Last, but far from least, was a talk by Heather Holden-Brown of hbb Agency about what agents are looking for. She may live to regret her enthusiasm – she’s now top of my agent stalking list!

My own two workshops were led by S D Sykes, who has published Plague Land (a murder mystery set in 14th century plague-ravaged England) and The Butcher Bird, which continues the story of young Oswald, who finds himself plucked from a monastery to become lord of his family estate when the heir dies unexpectedly.

There was practical advice alongside hands-on exercises (ninevoices members know how I usually feel about those!). The speakers talked frankly of their personal experiences and journey to publication, but with special focus on the aspects essential to writing historical fiction – authenticity and research, finding the balance between fact and fiction, dialogue, setting, etc.

In no particular order, here are a very few of the things Sarah Sykes mentioned (I have pages of notes, but just how long have we got?):

Although my own period – the 17th century – wasn’t specifically covered, I considered the day excellent value for money. I met engaging and committed fellow writers (what a nice bunch of people we are!), listened to a number of authors who’ve succeeded, and to two agents who assured us that they really do welcome approaches from new authors. It was also fun – and the white wine wasn’t bad either. This won’t be my last trip to Bedford Square.

Over 50,000 authors and their books are listed on this site with their descriptions and cover pictures. It is a treasure trove for someone drafting a blurb or synopsis and needing inspiration. Or even looking for something to read …